The “L1 Program” is a fundamental part of RIT Launch Initiative. This program introduces the fundamentals of rocketry to team members and (after a successful launch and recovery of the rocket) culminates in a Level 1 (L1) certification from the National Association of Rocketry. Acquiring an L1 Certification allows one to earn the subsequent L2 and L3 certifications. With higher certifications, one can launch higher-power rockets.

A.I.I.R.S. is an L1 rocket and my first rocket, using a Consumer Off The Shelf (COTS) body tube, nosecone, and motor. The internal bulkheads are made of laser-cut wood and the motor retention ring is a 3D-printed thread-and-nut configuration.

This rocket was designed with a payload section however a payload featuring deployment is not needed for L1 rockets as the igniter is built in to the motor itself with a pyrotechnic fuse. The A.P.G.E. flight computer was designed one year after the construction of A.I.I.R.S as part of an exercise to teach members of the RIT Launch Initiative the basics of avionics.

My overwhelming attraction to metal meant A.I.I.R.S. needed to have metallic paint applied to the rocket. For starters, the body tube, nosecone, and fins were roughed with some low-grit sandpaper to give some surface area for the paint to adhere. Before paint was applied, three layers of Rustoleum Filler Primer was applied with a light sanding between layers. Following the primer, the body tube and nosecone were given three coats of yellow spray paint and silver spray paint respectively. While applying the yellow paint, the fins were taped-off and silver spray paint was applied later. After the yellow and silver paints had dried, the body tube was taped heavily to allow for the black rings and stripes going across the body.

After all paint was applied, the letters were put in place and a layer of clear coat was applied to the entire rocket. 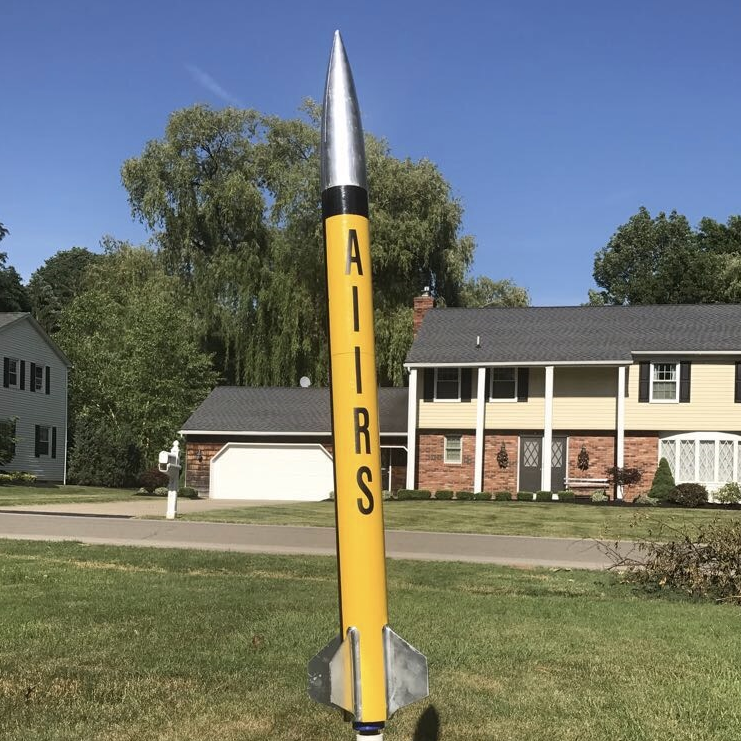